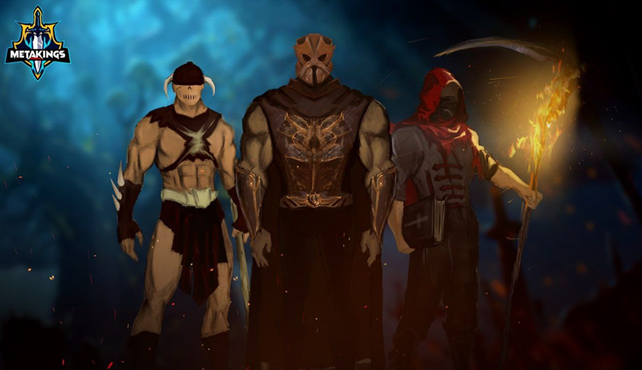 Metakings is an AI-powered action role-playing game in which anyone can earn rewards such as tokens and NFTs through competent gameplay and contributions to the ecosystem. This fighting system was modeled by the unique battle method used in popular games like “Demon Souls” and “God of War”.

“Metakings embodies rebirth and reconstruction, empowering players to shape their own reality in a new galaxy, new society, and new civilization.”

Players are allowed to engage in battles, gather resources, improve their characters, and establish their own land-based kingdoms. They can also collect in-game characters as Non-Fungible Tokens and exchange them for tokens.

In the beginning, each character is assigned a character class. This controls their performance in the virtual environment.

Overtime, this class can be changed; thus effectively transforming the player’s class when combined with a new weapon and an upgrade selection.

This new gaming metaverse has provided different combat options with a variety of weapons capable of altering a player’s speed during combat.

When a player defeats an opponent, he or she gains souls. Those souls serve as both experience points and game currency for the purchase of new weapons, armors, and other items. Players can buy weapons and armors, create their own unique NFTs, and engage in combat with other players to obtain additional resources.

While Metakings is a fun game, it has developed into a social network and job opportunity platform because of the vibrant community and profitability it provides.

Another interesting thing about the Metakings metaverse game is it facilitates the establishment of social systems such as voting, country and empire formation.

In fact, a decentralised autonomous organisation (DAO) governance structure is employed to give users complete control over their game, data and assets.

More so, players have control over taxation, dividends, and planet management.

The game practically merges elements of breeding and combat to create an immersive and outstanding experience.

Meanwhile, earnings are possible through the following methods:

Additionally, Arenas are the habitats for Metakings ($MTK). It can be described as a non-fungible token that may be acquired or created with $MTK, BUSD, or Crystals.

Different Arenas have varying effects on Metakings character abilities and MTK Crystal crafting prices. Furthermore, players may generate cash by leasing their habitat to other players.

Each habitat may host a maximum of one Metakings character at a time. However, a gamer’s habitat must be maintained frequently using crystals, otherwise it will degenerate and stop producing BUSD. Metakings users will have the opportunity to mint their own unique NFTs and invest them in unique characters and arenas in the VR battle world.

In the meantime, Metakings has launched its official airdrop program. It has gone on to airdrop 40 millions MTK tokens worth $40 to each of its early adopters.

Participants are required to perform five tasks to earn 40 $MKT tokens free. They can also invite their friends to participate in the airdrop program and receive 20 $MTK for each invite, or to join the presale and receive 10% of the deposited BNB plus an extra 10% of the MTK tokens for every presale or IDO purchase made via their referral link.

$MTK serves as the native currency for Metakings. Players can use $MTK to mint better characters, mint arenas, develop advanced technologies, and extend the lives of their characters by hiring and buying/selling on the Metakings marketplace.

There is also a maximum supply of 1,000,000,000 $MTK tokens. The liquidity is tight as the tokens are locked and the game rewards are invested for 6 months.

Worthy to note is the fact that the Metakings gaming metaverse will have an internal NFT marketplace where players can improve their guild and the economy via trading, selling or acquiring NFTs. These transactions will have a 15% tax cost for using the marketplace in any of their forms and will be returned to the rewards pool.

The marketplace will use $MTK as its default token and users will be able to determine the price of their NFT however they see fit.

MTK holders will be eligible for incentives by staking their tokens, participating in the game, and voting on critical governance issues. Plus, players will be able to earn $MTK by engaging in different games inside the Metakings metaverse and by submitting user-generated content.

In the future, new and enhanced experiences like Land, Mini-games, and Battle upgrades will be added. This will ensure players always have new and exciting objectives to accomplish inside the Meta-kings Battle realm. More so, the demand for $MTK will be fueled by the intrinsic value they offer to users in the form of competitive, social, and fun accomplishments.

Metakings is the world‘s first AI game that casts players as adventurers exploring the cursed region of Kunion. To ensure stability and scalability, the action-based game was developed on the Binance Smart Chain.

The article is provided by a third-party content provider. SEAPRWire ( www.seaprwire.com ) makes no warranties or representations in connection therewith. Any questions, please contact cs/at/SEAPRWire.com